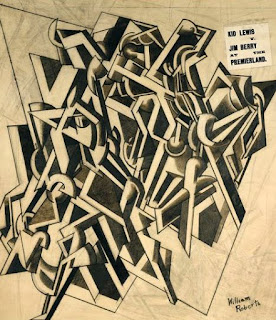 In around 1965 or 66, I was managing a small West End gallery called The Fine Art Gallery in Devonshire Street W1.

One afternoon a man arrived with a large roll of paper. He explained that it was one of six large drawings that he wished to sell, and that they were by Mark Gertler.

He unravelled the drawing (it was about 4 by 6 ft). It was of a naked man, in the 'Vorticism' style, and was drawn in terracotta pastel.

At once I could see that his attribution to Gertler was incorrect, but asked him how much he wanted for them. I think he was asking £50 for the six, and I said I'd buy them. He promised to return with all six drawings within a few days.

On the day he arrived with the drawings I was out, and my boss Miklos Vilag bought them in my stead. When I returned I saw them in the front room of the gallery, and went to give Miklos the £50; he declined my money and said that he'd bought them for himself. As you might imagine, I wasn't happy, and we had quite a heated argument.

I grabbed my things, and instantly resigned.

I had recently attended a William Roberts exhibition at The Tate, and had recognised the drawing I'd seen as being a sketch for one of his larger paintings. These were valuable drawings, and I'd been deprived of their ownership. I suppose as the Gallery owner Miklos had a right to buy them, but I was understandably bloody angry. In fact; I still am.

I have just seen that a Roberts painting was recently sold at Sotheby's for over £1 Million. I wonder what the drawings are now worth?