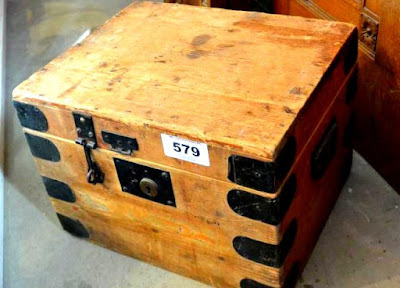 Many people won't know what this thing is, but let me assure you that it is an object of MAJOR importance to many a school boy or girl.

For those unlucky enough to be sent off to some sadistic educational establishment miles away from home, the 'tuck box' is a refuge to which one turns in times of despair.

At the beginning of each new term, it is packed with sweets, photos of one's dog (or parents), jars of Marmite, biscuits, cakes, and if one was not afraid of being bullied, maybe even a favourite teddy bear.

A good strong lock (or two) was essential on your tuck box, otherwise it would soon be emptied by some bastard latter day Bunter.

The only reason I'm writing this is that I saw one very similar to the above being auctioned on TV recently, where it was described as a 'small antique chest'. Not too sure about that; maybe I'm older than I think.

I don't know what happened to my own beloved tuck box; I would rather liked to have kept it.