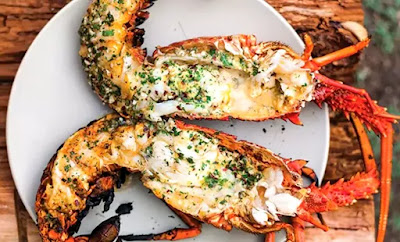 The Vegans are on the warpath again. How dare chefs kill Lobsters by throwing them into boiling water!

The process is actually pretty simple. Having been chilled in a fridge/freezer, to make them sleepy, they are then cooked in the most humane way possible; by being plunged into boiling water and killed in an instant. Any so-called 'screaming sounds' are caused by air escaping from beneath the carapace; and should not be translated as "HELP.... let me out".

The moaners would have a field-day with me. I'm a bastard; I occasionally eat live Oysters, and I often cook live Mussels. They'd obviously have me strung-up from the nearest Tofu tree.

Rather than talk their nonsense about Lobsters, why not divert their hatred towards the genuinely ghastly practice of Halal slaughtering. The annual Eid practice of taking Sheep out into the street, all over France and elsewhere, and cutting their throats, is an appalling act, and should be outlawed at once. But, of course, the vegans wouldn't want to upset the Muslim community; would they!

Obviously, all creatures are alive before being 'dispatched', and for those of us who eat meat, we hope that their end is as painless and swift as possible. I don't think that someone forcing the point of a knife into a Lobster's head (BEFORE plunging it into the boiling water) is going to make a great deal of difference; other than causing more pain.

Switzerland has instigated this kindness to Lobsters campaign, and there is talk of it being adopted by the EU. Personally I would have thought they had far more important matters to deal with.