The state of local agriculture. 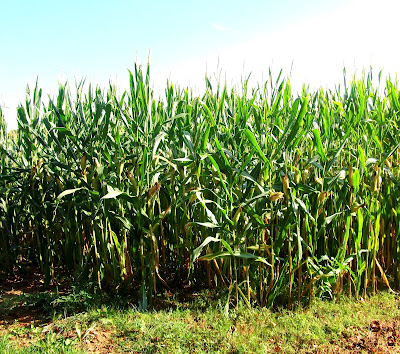 I had a long chat with my lovely neighbour, Laurence, recently; and what she had to say about farming was really quite depressing.

There are only a handful of crops now grown by farmers in this area; Wheat, Maize, and Sunflowers being the main ones. A few farmers still have dairy herds, but most of the cattle one sees are kept for fattening.

Otherwise there are Chestnuts, Walnuts, and, if one's lucky, a few Mushrooms.

It seems that almost everything is either no longer profitable, or disease is slowly taking over.

My other neighbour, Jean-Claude, has grown several hectares of Maize this year (as he always does), and will sell the crop as seed, rather than making silage. I gather that he will just about 'break even'.

He spreads manure, ploughs, brings in a contractor to sow the maize, he spreads fertiliser, he sprays weedkiller, he waters copiously, another contractor comes in to harvest, the grains are taken away and dried until of the correct moisture content, it is stored, then eventually sold. Every stage costs money, on top of which he has tractor costs, and has to pay taxes on his land. As I said above, he is lucky to break even. (Above is his crop).

We spoke of what other crops could be grown; nothing came to mind that could easily be sold. She also said that this year's Chestnut crop could well be the last one of any real quantity, as the Cynips bug has really taken hold.

Things do not look good.

No young people are wanting to follow their parents onto the land, and I can see the day when farms will be sold to people who have no interest at all in farming. Belgians, Dutch, and English will buy the more attractive farms for their horses, and the others; goodness knows what will become of them. Laurence said they will simply become covered in Brambles; as they did in the past.

Everything goes in cycles, so maybe one day there will be a return to actually growing things, but I think that time is still a very long way off.