The Fight Against Waste. 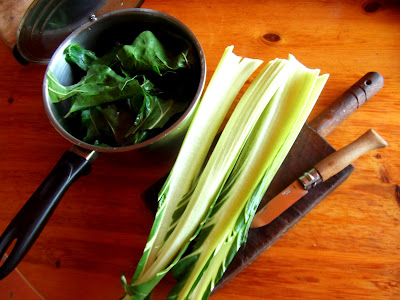 I love Swiss Chard, but have never been terribly keen on the stems. Up until this year I've always stripped-off the green leafy part, and thrown the stems away.

However, I've now decided that this is downright WASTE, and I am now keeping those stems, and eating them.

Firstly I tried putting them into my infamous 'Compost Soup', but they made it taste earthy. Then I tried cooking them as a separate vegetable, and I think I may have conquered the problem.

I cut the stems into about 4 inch lengths, then sliced each piece into thickish matchsticks. These I boiled for a while until softened, then fried them in Garlic Butter.

I can't see them being served at Maxim's in Paris, but they were 'reasonably' pleasant. Certainly much better than chucking them on the compost.