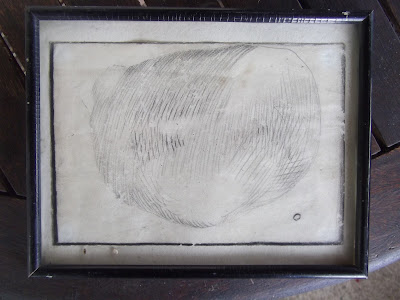 As students we gave each other lots of drawings, and other works. If someone liked something of yours, it was usually given away in unexpected appreciation.

Having said how much I liked it, my friend Bill K gave me the above drawing entitled 'Cloud'.

A couple of days ago I was cleaning its glass and wondered what had happened to him. I googled his name and found that he was living (and had exhibited) somewhere in Yorkshire; of where he was a native.

I sent him an Email and said I had a drawing to show him. He replied asking if I was XX from college, and was the drawing of a 'Cloud'?

Considering that the gift was made in around 1969, and that it was just a scrap of paper 4 inches by 6, I was AMAZED that he remembered it.

Anyway, I sent him the above photo, just to remind him.

Some people's memories are quite remarkable.