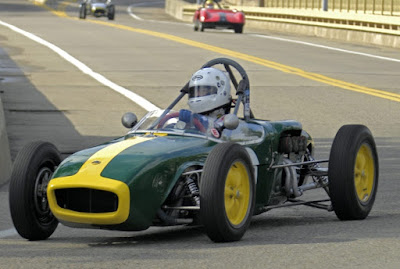 When I was about 16, and still at school, I had a friend whose father was not only extremely rich, but also had a passion for expensive cars and motor racing.

The son (let's call him J) had grown up surrounded by people like Sterling Moss, Graham Hill, Jack Brabham, and Jim Clark; as a result of which he rather fancied himself as a future motor racing champion.

To pamper his son's fantasy, his doting father bought him a Lotus Formula Junior car, exactly like the one above.

One Sunday J said he was going off to Snetterton race track to do a spot of practicing, and he invited me along. I watched as he did circuit after circuit, until he finally pulled-up in front of where we were seated. To my utter amazement he then asked me if I fancied doing a circuit or two myself.

Not wanting to sound like a sissy, I immediately said 'yes', and squeezed myself into the tiny cockpit, which seemed no bigger than an aluminium cigar tube. J ran through the finer details with me, and off I drove.

When I pulled-up I remember vowing never ever to get into a small racing car ever again. Of course I didn't actually say this to either J, or his father.

I do enjoy driving, and I enjoy speed, but not in one of those things again; thank you very much!