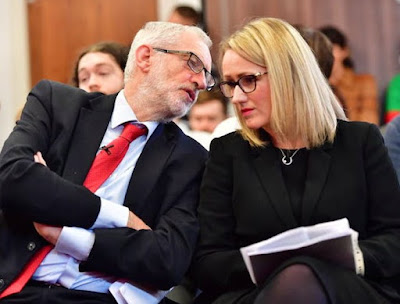 I must admit to having become quite perturbed that the Socialists were going to elect a new leader who might actually have brought them back from the wilderness. For a while Sir Keir Starmer looked to be leading the list of hopefuls, and it seemed as if common sense had prevailed; not something we expect from Labour.

Luckily, dear reader, I now hear that Rebecca Long-Bailey has crept into a 5 point lead, and it's back to normal.

A die-hard Corbynite (she's backed by Momentum, John McDonnell, and Diane Abbott), if elected she will follow the same crack-pot policies of her predecessor; many of which she herself devised for their last year's Party Manifesto. She might have nicer hair than Corbyn, but her crazy version of hard-left Marxism/Socialism is exactly the same.

Phew; for one nasty moment I thought they were trying to make themselves electable again.... thank heavens I was wrong!

I do hope she wins the leadership race. Don't let me down Rebecca!