The reign of Queen Elizabeth II was almost faultless but it did have its moments; just nowhere near as many as Netflix would have us believe.

I suppose we have to start with The Queen's younger sister, Margaret, who was, in any other situation, a perfectly normal fun-loving gal. Sadly her penchant for riding around on motor bikes, getting squiffy in restaurants, and leading young men astray, was not seen as befitting a Princess.

Then we had Fergie... Dear old Fergie, the first 'royal consort' to demonstrate how best to be a 'commoner' by going on a rubbish TV game show. It brought the alure of the Royals down to rock bottom, and we all groaned as she and a few other young Royals made idiots of themselves. After five years of marriage to Prince Andrew she became bored with his constant absence (his duty as a Naval Officer naturally took priority over his being at home) and Fergie began to 'look elsewhere'. Amazingly it was Princess Margaret who wrote to her saying "You have done more to bring shame on the family than could ever have been imagined". 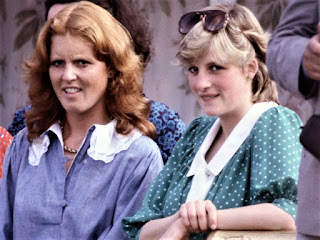 After, and running parallel to, Fergie came the still much-admired Ms Spencer. After two years of marriage her roaming eye very quickly led to a string of 9 different lovers, whilst new husband Prince Charles cosied-up to his one true love and waited for a divorce after which he would re-ignite his relationship and marry the much more suitable Camilla. Diana's constant search for privacy led to an army of paparazzi following her every move and naming her every new beau. It was whilst trying to escape the press and hide her relationship with Dodi Fayad that it ended badly.

In more recent times the antics of 'Randy Andy', and 'Ginger and Whinger' have been grabbing the headlines. Both Andy and Harry have now been stripped of certain titles and duties, and Harry's wife has dug a huge hole for herself into which she has willingly leapt. Of course for Netflix it's the bastards at Buck House who are all to blame.

I don't see any 'bad eggs' waiting in the wings, so King Charles's reign starts well. The current junior Royals now seem like a good bunch, but of course they are young, and it remains to be seen how they develop. Little Prince George does have a look of Henry VIII about him, so maybe a few future heads will roll.

Overall, it was a calm reign for Her Majesty. Just an errant sister, three errant consorts, one errant son, and an errant grandson wasn't a bad record. Let's now hope that the 'person' her aides named as the 'Narcissistic Sociopath', and her lap-dog husband, just shut-up, and go away.

As far as 'they' are concerned, if the only way you can earn mega-money is by being nasty about your esteemed family in TV interviews, fictitious documentaries, and in silly so-called biographies, then it's time to take a long hard look in the mirror.