Have Godparents become a thing of the past?

With so few churchgoers, and so few babies being Christened/Baptised, it does seem that Godparents are no longer required. No more plunging babies into cold water, no more promises to make sure that he/she behaves like a saint, and no more guaranties to make sure the poor thing believes in gods, devils, and pixies. 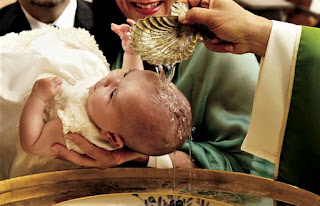 Only once have I been asked to be a Godfather. It was someone I hardly knew, he was a Catholic, and I had never met the infant daughter concerned. Why he chose me is something of a mystery. Anyway, I said 'no', and explained that I wouldn't be a very good example to a young French maiden. Of course, I could have given her a few Francs every birthday, but that didn't seem a good enough reason to go against all my principles.

I myself had a Godfather; he was the husband of my mother's older sister, known to all as Sir James. Unfortunately, he went mad and ended up in a 'home'. As my dutiful Godfather, he had left me a tidy sum in his will, but by the time he died his own sister had bled him dry. My father had been his executor and revealed the sorry state of affairs after his demise. I really wasn't fussed.

That was my only experience of Godfathers, and I'm not sorry to see the 'position' fading into obscurity. I think we can all happily live without them; and I for one can certainly live without having been one.