When I return to my native land, I need to show my valid passport stating that I have 'right of abode' in the UK. If I was to try to enter without any papers I'd probably be thrown in the slammer and put on bread and water. 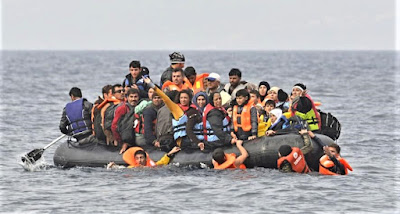 So, when people land on the beach in their own craft (rather than taking the much cheaper, safer, legal, and more comfortable ferry) they should go through the exact same process as I do. If they can present passports and proof of residency in an EU country, or possess some sort of genuine visa, they would be given a three month permit to stay, and allowed to go on their way; just like everyone else. If they wished to apply for asylum at a later date they could do so.

If, however, they have no papers they should be treated like any other illegal immigrant. All I wish to see is EQUALITY, and basic abidance of the law.

Of course it'll never happen; nor probably should it. But someone has to come to a realistic solution. We cannot continue to have hordes of Albanians (other nationalities are available) being let loose on our high streets (currently the number of Albanians in UK prisons is costing us £57 Million p.a. Many of these people come with criminal intent, or to escape criminal proceedings back at home. They are certainly not wanted here.

I cannot understand why (yet again) there is one rule for law-abiding citizens, and another for the law breakers. And why the law breakers should be treated to hotel rooms, free handouts, and pampering, baffles me. I suppose (yet again) it's their so-called 'Human Rights'.

Of course, Sir Kier Starmer (Lab) continues to moan about the situation, and moan about every proposed solution; but he would.

Some hard-line action HAS to be taken, even if it is slightly distasteful. The whole business has become ridiculous, and out of hand!

N.B. Just in case news of such UK illegal immigration has not reached wherever you live, the photo above shows what has become a daily occurrence on South Coast beaches around Dover. About 40,000 have arrived in small rubber boats so far this year; mostly men, and I believe mostly from Albania.