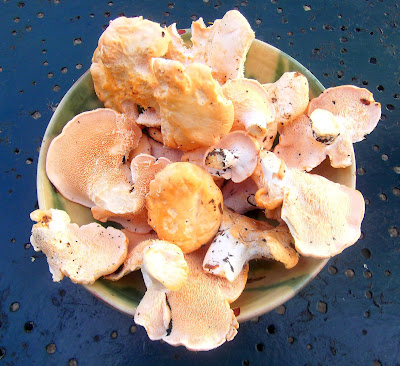 These are pretty much the last of the year's mushrooms.

Known in the UK as Hedgehog Mushrooms, in these parts they translate as Rat's Teeth, Deer's Feet, or Sheep's Feet. Personally I prefer 'Rat's Teeth' as it describes perfectly the underside of the mushroom.

In past times (40 years ago) I would take a large wooden crate into the woods, which would be filled within an hour or so. I would often return several times during the day. The resulting haul would be sold to merchants who went from farm to farm. I was told at the time that the mushrooms were used in the pharmaceutical industry; but I suspect most went to be eaten. Today's forager would find such quantities almost impossible to collect; the few above took me over an hour to find.

Rat's Teeth are very delicate creatures. They are mostly 'brushed' clean, but they often require rinsing under water. They also break very easily. When cooking, the water used for cleaning floods out, and has to be boiled away before they actually begin to fry.

So, to the most important thing; what do they taste like?

When eaten alone, they have a delicate mushroom flavour, but when cooked with chicken or lamb they take on the flavour of the meat. Mixed with chicken, not only is the colour much the same, but the quantity of the meat appears to multiply; as if my magic.

An easy mushroom to identify; those underneath teeth are a give-away. Look in November amongst mixed Pine/Chestnut trees.