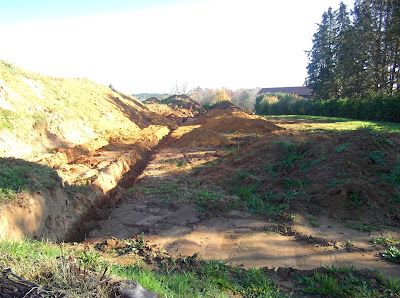 FORTY-BLOODY-FIVE years I've lived in my tiny hamlet; forty three of which were spent in perfect peace, quiet, and harmony. I've owned two different houses here, (and another a few miles away), but when I started to make our present one livable-in, we were assured by neighbours that our tranquility was GUARANTEED; local by-laws totally forbade anyone from building new homes here.

At the time I had just two lots of neighbours. Immediately next door (100 yards away) were a pair of Parisian, Zen Buddhist, Lesbians, who were a total delight. And the other house (another 100 yards further away) was owned by a man and his elderly mother who spent just a couple of weeks a year here.

Since then all of my original neighbours have died off, and I am left surrounded by those who have arrived since; I feel like the last of an era. I bought, and restored, my ruined cottage for it's simplicity, beauty, and tranquility, but even though we try to live a quiet life, there are always those who try to see that we don't.

Over recent years we have faced some really bizarre behaviour, but now we are facing possibly the worst of the lot. We are to have a holiday village plonked right on our bloody doorstep, and we are supposed to be grateful.

27 (probably rowdy) holidaymakers will soon be disturbing our Summer's peace and quiet; 27 of a type who are prepared to holiday in buried shipping containers, whoever that might be.

In the photo above you might just be able to see the roof of a barn. My youngest son owns the barn next to it (slightly further to the right) so you can imagine his proximity to the holiday camp. The huge mounds of earth show where the old shipping containers will be semi-buried.

The 'newcomer' who wishes to start this holiday camp is surprised (angry even) that all the surrounding residents are against his plans. He doesn't seem to understand that once our treasured tranquility has gone; it will be gone for ever.

We bought our homes for the peaceful bucolic ambiance they afforded; he bought his with the surreptitious intention of bringing in loads of effing holidaymakers. I can hardly explain how bloody mad I am. He arranged an explanatory meeting recently; I couldn't even face seeing him.

The most recent newcomer to our tiny hamlet (a Brit) bought his small converted barn just a year or so ago, and now finds that he is to have a semi-underground trailer park right behind his house. He is understandably furious. No-one had said a word to him about it as he was completing his purchase. I feel more sorry for him than I do for any of the others; including myself.

The would-be holiday camp owner has already fitted several inappropriate fittings to his beautiful ancient home, including an awful 1950's door, and a striped awning; one can only imagine what more horrors are to come. I do wish he would just bugger off, buy himself a more suitable secluded property, and leave us all in the peace that we so covet.

Some people just couldn't give an effing damn about their neighbours! Money is god!