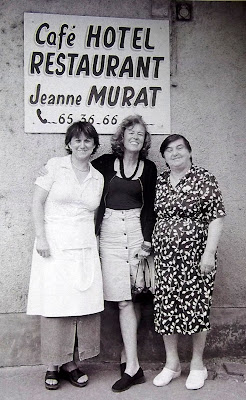 L to R: Sylvie (Mme Murat's daughter), my good friend the writer Mary Moody, and the lovely Jeanne Murat herself.

My favourite (lunchtime) restaurant in this area (above) is run entirely by women; they prepare, they cook, and they serve, all to near perfection. I have been both a frequent, and an infrequent, client of theirs for around 45 years. We are on bisou terms.

They seem to have a natural understanding of what it takes to satisfy the hungry, and reasonably gourmet, man or woman, and it surprises me that other less successful local restaurateurs don't visit them, with the idea of copying their simple formula.

It really isn't complicated. A decent soup, a plate of charcuterie, a main course (usually a choice of just 1), a small selection of cheeses, a desert, and coffee. As much wine as one wants is thrown in. No printed menu, just a hastily written exterior chalk board announcing the main course for that day.

On the other hand I have visited many more pretentious local restaurants where they worship at the altar of 'minimum effort'. Entire dishes are bought-in in vacuum packs, and re-heated in those wretched 'hot water baths'. The 'hot water bath' has become the industry's worst enemy, it gives people who know little about cuisine, a false sense of professionalism; TV cookery shows, and even roadside eateries, are awash with such so-called 'chefs'.

A whole menu can now be taken directly from a chiller cabinet, with maybe just one element being cooked to order; a steak, some confit, or a piece of fish maybe. Almost every other element is dropped into the boiling water, then snipped open and emptied onto a plate. I know of one (well respected) local restaurant where exactly the same menu is presented all year round. One is happily served stuffed courgette flowers in Spring, just as in deepest Winter; all, no doubt, originating from some industrial packing factory in Taiwan or Mexico.

Between Michel Guérard (and his ilk) and the 'hot water bath', French cuisine has been dealt a low blow. Can it really be that difficult for a professional cook to produce a decent meal for about 20 to 30 people without resorting to pre-packed ready meals?

Look for the signs. A single chef in the kitchen. A chilled foods lorry delivering once a month. A laminated year-round menu. You've been warned.

Photo by Vivienne Cole. (I hope she doesn't mind me using it)

For further reading on this depressing subject, go to.... http://www.nytimes.com/2014/01/29/business/international/in-france-a-battle-to-keep-menus-fresh.html?_r=0