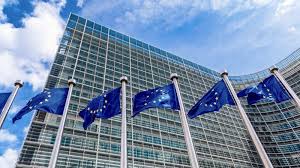 Over the years I have been VERY critical of the inefficient and interfering EU; and I think rightfully so.

It's not rocket science; if anyone is to blame for the UK's decision to ditch the union, it has to be those who run it.

There is no question that Merkel and her acolytes wish to control a European state. The Germans cannot forgive the loss of two world wars during the last century, and are now trying to spread their influence through financial and industrial strong-arm tactics instead. The people of the UK have simply said "ENOUGH IS ENOUGH".

Yes, I voted to stay inside the EU, but I can see quite clearly why the people of Britain voted to pull out.

I blame Merkel, the EU commissioners, the bureaucrats of Brussels, and all the recipients of gravy-train perks; I also blame the 'old boy network' at the top of the EU pyramid; just look at the Kinnock family if you want a classic example.

But, don't worry too much. It's going to take a long time to detach ourselves from the club, during which time mainland EU countries will be shitting themselves hoping that, as the UK is no longer a member of their exclusive single market, we will still allow the huge amount of imports that we've been forced at accept over the past 40 years. We were even forced to accept 20% of our milk and dairy products from Europe; that can stop for a start.

If British politicians have the balls to take the upper hand, I'm sure the UK will thrive; if they allow themselves to be dictated-to as before, they will not.

Merkel, Hollande, Tusk, and Junker are all now expressing their sadness at the UK's leaving the fold. They really should have thought about that before, when Cameron was trying to negotiate terms.

In 1975 the UK joined a COMMON MARKET; not a COMMON PARLIAMENT.