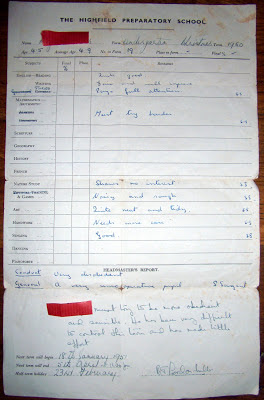 I first posted this in July 2010, but consider myself academically confident enough to do so again.
It's probably true to say that Cro did not have a 'brilliant' start to his academic career. Day dreaming, Drawing, and Fishing for tiddlers in Farmer Bell's pond; all took priority over Latin, the dates of Historic Battles, or the confused workings of Mathematical Theorems.

Above is my very first proper school report from this small private school in East Grinstead, Sussex; the headmaster of which was the brother of Patrick Gordon-Walker, a well known politician of the time (The headmaster of my next school happened to be the grandson of Gladstone)... I WAS 4½ YEARS OLD at the time of this report!!!

Headmaster's Report: He must try to be more obedient and sensible. He has been very difficult to control this term, and has made little effort.

So, there we are; a  4½ year old boy who obviously enjoyed singing and listening to 'stories'. I quite expect that what I really wanted was to be LEFT ALONE, have the occasional wound patched-up by an attractive busty white-clad nurse, and be given a lump of raw meat to chew from time to time (Yes, I really did eat lumps of raw meat).

I'm sorry I don't have the school photograph with me in France that accompanies this report; it's hilarious. It shows a group of maybe 150 perfect, clean, smiling, happy, well dressed, angelic little children, with just one horrendous scruff-bag sitting in the middle of the front row. Guess who that was? Happy times eh!

OPEN LETTER. To the now long-dead teachers of Highfield School (especially SS). I eventually did pretty well in my 'Common Entrance' exam which enabled me to become a Latin Scholar at a highly academic upper school, got enough qualifications to go to university  and ended up with a 1st Class Hons degree in my chosen subject. So I can't have been ALL BAD. You simply overlooked the fact that I had 'Artistic Temperament'.

So, SS (Miss Sargent) and Mr Gordon-Walker, you can stuff your silly report! I just regret that I was too young to suggest that you did so at the time.