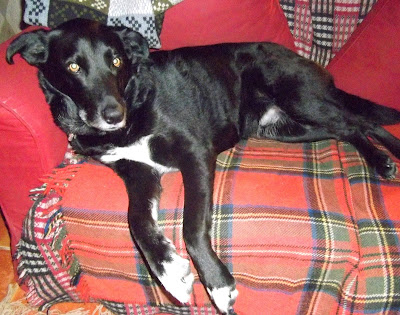 Sometimes when I look into his eyes, nothing else in the world matters.

Trump can build his walls, Corbyn can dream of Lenin, and LePen can jump off the Eiffel Tower. I couldn't give a monkeys'.

It's easy to think of dogs as just four legs, a nose, and a bottomless stomach, but they are very complex creatures. I'm sure that Bok understands that he's not one of us humans, but he knows his job and shows utter devotion to his extended 'pack'.

I was sitting with him yesterday morning, just before I took his photo, and I could feel a really strong relationship between us; stronger even that one might have with direct family. He looks at me with total confidence, and knows that, come what may, we'll make sure he's well looked after.

He's been in heaven with the boys here; they adore him too.

It'd be interesting to know exactly what goes on inside his head; but maybe not.