I have a friend who's father bought a job-lot of paint from British Rail. It was going cheap, so he bought several very large drums.

It was when British Rail were changing their livery from dark-ish green to light-ish blue (1960's ?). They had thousands of tons of the green paint still in stock, and they were eager to be rid of it.

My friend's father painted the house, the shed, the railings, the chicken run, all the furniture, and probably his pencils, in British Rail green.

Of course people started to address their envelopes to Railway Cuttings, or The Station Master, or The Waiting Room, or Platform 5, etc. Apparently he became incensed every time an envelope dropped through the door addressed as such. It was all good fun. 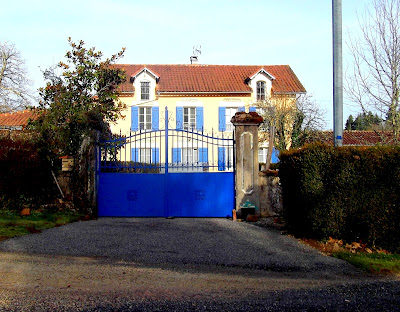 The house above has always been referred to as 'La Maison Bleu' for obvious reasons. It has had the same colour scheme for over 44 years, ever since I've lived in the village.

I wonder if the owner also bought a job-lot?