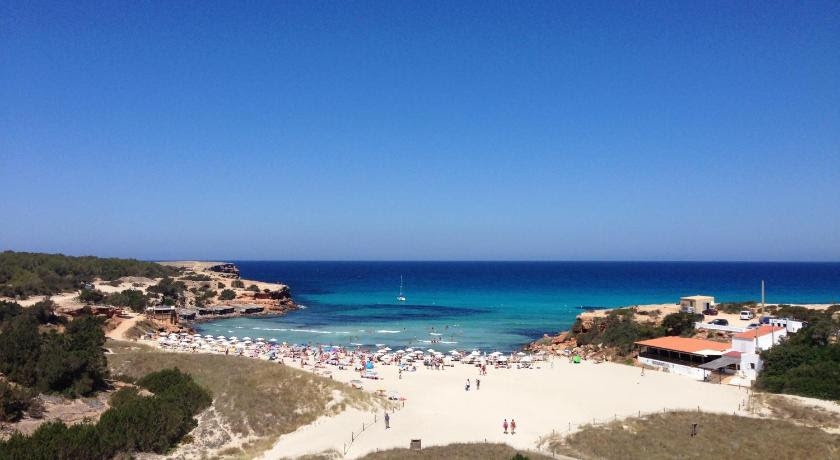 You will need to enlarge this photo to see what I'm talking about.

The tiny island of Formentera used to be one of my favourite holiday destinations. Very few people knew it existed, and it wasn't easy to reach. If I was looking for peace and quiet in a spectacular location; it was where I went.

Everyone knows of Majorca, Minorca, and Ibiza, but the tiny island of Formentera, to the south of Ibiza, remained a semi-secret.

In the days when I visited, the small bay (above) of Cala Sahona was almost deserted, and the restaurant on the right (with red roof) was no more than a shaded shack with a simple barbecue. Even in the height of summer there were rarely more than a dozen people on the beach.

Now I notice that the beach is littered with parasols, there's hardly room to move, and the small hostel where I used to stay, has since become a large fancy hotel.

The King of Spain used to moor his yacht in the bay, and swim in the crystal clear waters. But these days I expect the smell of Ambre Solaire is overwhelming, and no doubt Pedalos make swimming hazardous.

It's rather saddening to see how much it's changed and become just another package holiday destination; it used to be quite special.

On one of my trips I built quite a large tumulus (or Cairn) on the rocky cliffs overlooking the sea to the right of the picture. It took me two weeks of hard graft to build it; I wonder if it's still there?