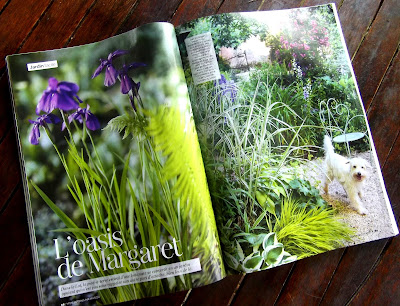 When I came to live here in 1972, I'd imagined that I was the first Englishman to step foot in the area since the 100 year's war.

I later learned that the village Chateau had been owned by an English family since the 1930's (I think); we later became good friends, and still are.

So you can imagine my surprise when, not long after we'd arrived, I noticed an English registered car outside a nearby village house. I knocked on the door, and the occupant was as equally amazed as I was to find a fellow Brit in the area (even though she is a Kiwi). Nowadays there are Brits and Dutch everywhere.

Margaret (for that is she) is an international garden designer and author of note. Her book 'Tropical and Subtropical trees: A Worldwide Encyclopaedic Guide' is a classic. Her garden here in nearby St Caprais has just been featured in a French 'Homes and thingies' mag'.

One doesn't meet many 'remarkable' people in life, but Margaret is certainly one. Life would never have been so much fun had we not met.

Poor Margaret is going through a few hip and knee-related health issues at the moment, so she is a bit out of action; but you can't keep a good woman down, and she's still working on garden designs from her sick bed.

Here she is in her beautiful garden with her funny dogs. 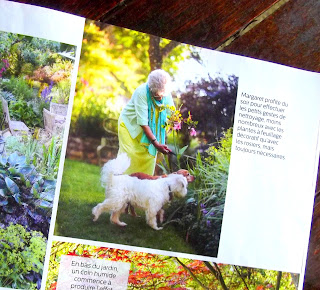