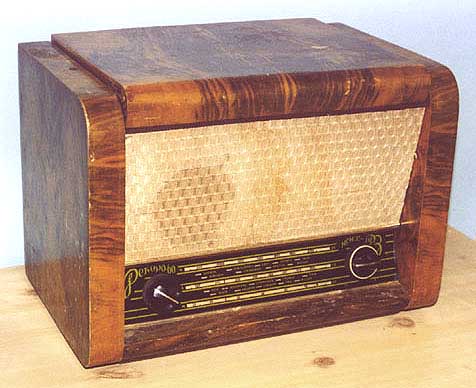 I'm not a big 'lunchtime' eater, I much prefer to 'dine'.

My parents, however, were more traditional, and Sunday Lunch was sacrosanct.

So, there was I yesterday evening, enjoying some simple roast Lamb, thinking back to when I was just a wee sprog, and how Sundays were so very different.

Of course, in those primitive days, all shops were closed on Sundays, and almost the only entertainment on offer was some silly old buffer's demonic, primitive, sermoning in church. Sundays were tedious; that is, apart from lunchtime.

My mother (like everyone's mother) was a wonderful cook. Those huge joints of roast beef, legs of lamb, or roasted chickens (usually our own) were sumptuous.

TV was not yet invented, or if it was it hadn't arrived chez nous. We had a big 'Odeon style' wooden-bodied RADIO (with a 'magic eye') that could pick-up broadcasts from Hilversum (why was it that all old fashioned radios could be tuned in to Hilversum?). It wasn't exactly like the one above, but similar.

We'd listen to Archie Andrews, Have a Go (with Wilfred Pickles), The Billy Cotton Band Show, and Two-Way Family Favourites. Listening time was limited; turning on the radio was a 'privilege'. Maybe later in the day we would also listen to a evening play.

Life was so simple. The kettle was heated with flames, Wilfred Pickles handed out £1 notes on the radio, the telephone was only used in emergencies, and the sun shone 365 days a year.