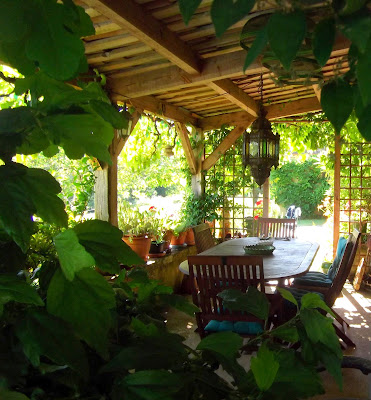 Nothing is yet carved in stone, but in a post-Brexit world, Brits living in France will probably be limited to a 3 month stay each year. During the other 9 months, they will simply have to go and live elsewhere.

It is estimated that about 150,000 Brit families live in France; probably couples much like ourselves, living out in the countryside.

Not counting house expenses (water, electricity, rates, etc) each household probably spends about £1,500 per month on general living expenses; about £18,000 per annum (much as elsewhere). If one multiplies that by 150,000, it contributes a lot of 'new money' to small local communities. Take away 9 months worth of that spending, and you can imagine what effect it would have on small local economies.

Many tradesmen, service providers, and local shopkeepers, have become dependent on foreign money. They have expanded their businesses, and profited enormously from keeping newcomer Brits and Cloggies happy. The Cloggies will remain, but the big-spending Brits will either sell-up, or reduce their visits to just a few weeks each year. We know when we're not welcome, and there are plenty of other countries where we are! (Croatia?)

Both Brits and Cloggies are perfect immigrants. Both nationalities are mostly law abiding (other than a very few exceptions), we tend to restore old buildings (that might otherwise have been lost) to a high standard, and we contribute hugely to the cultural life of our communities. Mostly, however, we live on imported 'new money', which is a gift for any economy. We ask for nothing 'financial' of our hosts in return.

I have heard of villages where almost 80% of the residents are Brits (nightmare); these villages will die. They will return to how they were before their Brit restorations.

Frankly we no longer care. Our own tiny hamlet has been totally buggered by the frantic chase for tourist €uros, and we mourn the loss of its bucolic tranquility and gentility more than we do being kicked out by Macron. One has to wonder if all those €'s spent trying to attract tourists, will now fall flat.

I just hope that, in future, we'll only have to pay 25% of our local rates bills; it wouldn't be fair to charge us the full 100% if we're banned from living in our own homes for 9 months of the year, would it!