These little Wall Lizards are very much a part of our everyday lives. This particular one had been poking her head out from the fountain spout, but (of course) decided to move as soon as she saw my camera.
Lizards (from Latin Lăcerta) get everywhere. They live in the walls of the house, in watering cans, and I've even found them inside my drying swimming trunks. Nowhere is out of bounds for Lizards; they can be found anywhere at any time. I would estimate there being about 20 that live in the nooks and crannies of the front wall of the house, and countless others elsewhere. They scuttle about all the time when it's sunny. 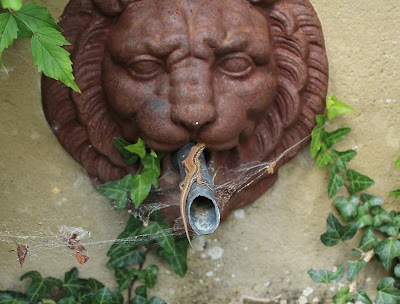 We only have two varieties of Lizard; these common Wall Lizards, and the much bigger European Green Lizards. The Green ones are very shy, and much rarer. I occasionally see them sunbathing, but as soon as they see me; they're off.
We do also have the rather unpleasant looking black and yellow Salamanders, but they rarely live close to humans, and only seem to come out into the open after rain.
Lady Magnon has a semi-tame Lizard that lives under the windowsill outside the bedroom. They spend ages just looking at each other. I think she named him Marmaduke, or maybe Gerald, or he could even be Boris.... Actually, I think he's called Norman, or maybe it's Harold.
Posted by Cro Magnon at 15:05