It's all very worrying. 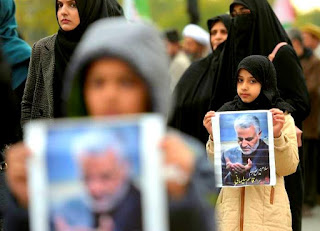 I am no expert on the 'war crimes' of Mr Soleimani who was recently killed by the Americans, but I have to accept what I read, and am certain that he was NOT a pleasant man.

So I was extremely saddened by the sight of so many, who fled their Middle Eastern countries to live a better/safer life in the UK, gathering in Maida Vale, London, in order to mourn his passing. The Imam claimed Soleimani to be a 'martyr', and someone whose aims were to 'aspire to'. No doubt such gatherings were held at numerous other centres across the country.

Many from the Middle East had fled to the UK specifically to escape the likes of Soleimani & Co, and, now, to see those same people mourn his passing, and threaten the US, is something of an anomaly.

Under my recent title of 'New Year Resolutions for 2020' I was going to add my hopes for an end to the hatred that exists in the 'them and us' culture that is spreading across the UK and mainland Europe, but this just demonstrates how far we have to go.

Such rapprochement cannot simply be one-sided. We need compromise, understanding, and friendship on both sides. The prisons of Iran are filled with innocent young men and women who face daily torture, rape, and eventual execution as a result of Soleimani's brutal regime. Maybe those who now mourn his death should be grateful that they managed to find refuge in a more liberal UK.

Regardless of the rights or wrongs of killing Soleimani, his death can only help create a greater divide; if not eventually a full-blown war!

Having seen the attitude (on either side) towards his death, it is not impossible to imagine revenge spreading to the streets of Europe.

Boris, Macron, and Merkel, have all asked for calm..... let's hope Trump is listening. We all remember the legacy of Bush and Blair.


Addendum: This morning I hear that the Maida Vale centre is to be 'investigated'.