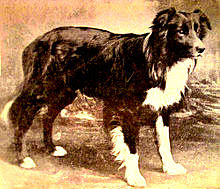 This dog above is a distant relative of Billy's.

1893 was a significant year in the canine/agricultural worlds. It was the year when Auld Hemp was born, and his birth changed Sheep-farming for ever..

Bred by Adam Telfer in Northumberland, he was the first pukka Border Collie (Northumberland is on the 'border' between England and Scotland; hence the name). He was also the first sheepdog who followed orders precisely (or could be trained to do so).

Border Collies are fast becoming one of the most popular pet dogs. Previously Labs were No 1, but I've noticed over the past few years that, in adverts, Border Collies are appearing more often than Labs. Our Billy has a lot to live up to. 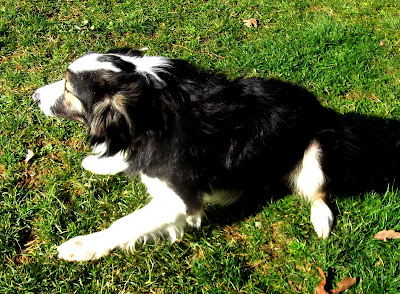 This was him playing in the sun yesterday. One thing he certainly hasn't learned from his glorious ancestor, is how to sit still for a bloody photograph. I despair.