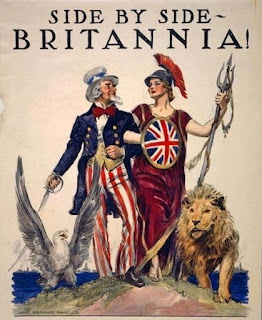 OK, I was born on the 22nd, and not the 4th of July, and I'm no cousin of Uncle Sam's, but as an ex-pat Brit, I still feel permitted to voice my opinion about the recent election of Mr Trump.

I have yet to encounter anyone in Blogland, on Facebook, or on social media in general, who really welcomes the success of Donald Trump; his supporters seem very reluctant to whoop and holla. Au contraire, from his opponents I see nothing but insults, hear of riots, read serious fears of Armageddon, and have already become used to pointed death threats. Whatever happened to 'dignity in defeat'?

The American people have had their say, and Trump will accede to the Oval Office in the new year. There's no going back. That's it. End of story.

The Dow is at an all time high, Trump has promised to stem the flow of illegal immigrants from the South, bring back manufacturing to the Rust Belt, and attempt (gawd knows how) to prevent extremist Jihadists from entering the country.

Strange that I remember these policies that Trump expounded in his inimitable way, but I don't remember a single one of Clinton's.

Let's be honest; Trump didn't win this election, the Socialists lost it!

There have been tears shed, an awful lot of hand wringing, and the usual suspects have taken to the barricades; much as we experienced in the UK after the recent 'Brexit' vote (I voted to remain).

People voted for Trump in their tens of millions, and they have to be taken seriously. It is now time that the losers appreciate that sometimes we win, and sometimes we lose.

I can imagine my own feelings should Corbyn be elected as Prime Minister of the UK (heaven help us), but I like to think that I would begrudgingly accept the fact, and life would continue as normal.

I played Cricket when I was younger, my oldest son still does, and his boys are already in junior teams. The first thing you learn when you start playing Cricket is that 'The Umpire is ALWAYS right' (even if he isn't). It's much the same with the will of the people. I've played both school and club Rugby, and I rowed 8's at Henley and elsewhere. In all cases where we either won or lost (mostly lost), we always joined with the opposition over a few pints after the battle field was cleared; we never remained 'enemies'.

Luckily I can say all the above because I was very much on the fence concerning the recent US election. I certainly wouldn't have voted for Clinton, and Trump appears to me to be just plain dim.

So, hunker down y'all; it's 'all change' in only 4 years time, when the fragrant Mrs Obama will probably be taking over..... I shall now try to not mention Trump again!

p.s. And don't forget that 'Lies, let's re-count' is an anagram of 'Election results'.